The Decline of American Running 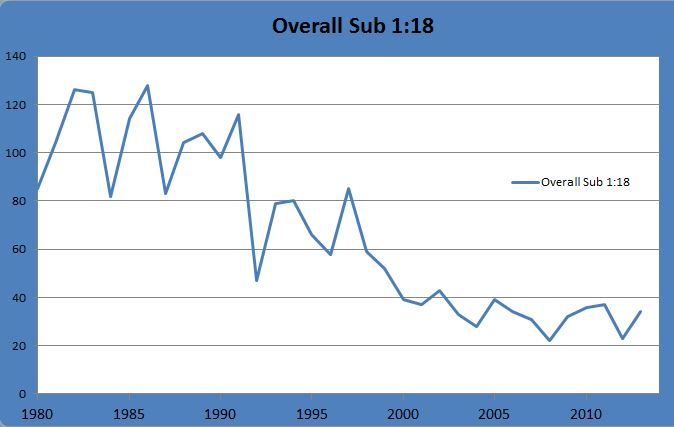 This is a reprint from my first blog.

The first running boom started in the mid-70s. Bill Rodgers, Frank Shorter, and others introduced Long Distance running to the masses. That running boom is a blip on the radar to what we see today. Races these days may have 10 to 20 times the number of participants compared to 40 plus years ago.

With all the technology in shoes, diet, and training, one would think we should see improvement in our collective overall times. Shockingly nothing could be further from the truth. In fact, just the opposite is occurring

In Jan 1975, I ran the Mission Bay marathon 3 hours and 3 minutes as a 16-year-old. I didn’t think it was anything remarkable at the time as I had a good portion of the runners ahead of me.

With today’s time, 3hr 3 min sounds pretty decent for a junior. The fact is, Back then I only placed 31rst in the Junior division. In that race, there were four 16 years old’s who broke 2 hrs 40 minutes. I was beaten by an 11-year old by ten minutes. What is even more striking, is how many people ran the race. With 502 starters, I placed 140th overall. This means I wasn’t in the top 25%!

The first 18 year old in the LA marathon came across the line in 3hr and 2 min.

The first 18 year old in the Mission Bay marathon was Kirk Pfeffer, in 2 hours and 17.44 sec. who set the World Junior Record, Nearly 45 minutes faster!

But remember. The LA marathon had more than 40 times the number of starters!

The LA marathon also brings in seeded runners. This skews the results even further. There were only 24 men and women under 2 hours 40 min. In the MB marathon, 43 people were breaking the 2hr 40 mark. Twice as many as LA and again LA had over 20 thousand runners vs. the 500 for the Mission Bay Marathon.

OK. so what is the problem?

We know running has changed and many people only want to run a marathon once in their life and check it off their bucket list. Nothing wrong with that. I commend anyone who puts in the effort.

But, It is assumed the top 10% of the runners are still somewhat serious with their running. It is doubtful the top runner’s weight or commitment issues to the sport as some of the hobbyists. But keep in mind not all of the runners back then took the competition seriously either.

This means the only answer can be training. I believe this once and for all proves the current training methods which promote ultra long runs for non-elite runners are hurting marathon running in America.

The reason is twofold.

One, they do not work. Running slow for long periods only teaches you to run slow.

Two, They also discourage runners from keeping up the sport for multiple years.

For some runners, it will take 4-5 years worth of effort to drop below the 3-hour mark.

These super time intensive runs have both an adverse psychological effect and also impact personal life by spending so much time all at once. Besides, instead of running seven days a week, people take days off or cross-train, which may make you more fit overall, doesn’t make you any faster.

So what is the solution?

3. For serious runners that wish to break 3 hours, follow the results of the survey taken on the runners after the race and put the mileage in. Almost all were over 50 Miles with the majority closer to 75 miles.